Lori Sinsley is an award-winning communications expert and strategist with a track record of creating and leading climate, clean energy, and sustainability campaigns that win. With more than 30 years of corporate and marketing communications experience, her specialties are strategic planning, media relations, stakeholder mapping and thought leadership.

She is the founder and principal at All Things Green PR where she works with non-profits, climate and clean tech companies, utilities, corporates, and global PR agencies to advance their sustainability goals. Her consulting practice was one of the first clean energy and sustainability agencies in the industry.

Ms. Sinsley was previously the Communications Director at Stem, Inc. where she served as a strategic communications advisor and media trained executives for interviews with Bloomberg News, Bloomberg New Energy Finance, Forbes, GTM Research, Motley Fool, and The Wall Street Journal that resulted in 20+ million impressions and help close $500,000 in new business.

Previously, she was appointed to the California Energy Commission as the agency’s first Deputy Executive Director of Strategic Planning and Media and later served as a special advisor to Commissioner Karen Douglas. Her achievements there include leading an 18-person team that increased media coverage by 25 percent in the first year, launching the agency’s social media program, and using media outreach to influence public opinion on the Desert Renewable Energy Conservation Plan that helped win a 74 percent bipartisan approval rating in a Pew Charitable Trusts survey.

Prior to that, Ms. Sinsley was a Media Director for Environmental Defense Fund where she ran communications for the California climate and energy programs. While there, she handled message discipline and built a diverse coalition of supporters that helped achieve the overwhelming defeat of the $10 million, industry-backed measure to roll back California’s historic climate law.

She worked for technology companies in Silicon Valley and New York and for global PR agencies Fleishman Hillard and Weber Shandwick representing brands including AT&T, Charles Schwab, Starbucks and UPS.

She began her career at Stoorza, Ziegaus, Metzger & Hunt, one of the most effective and well-respected public affairs firms in California where she won two IABC Gold Quill awards for government relations and employee communications.

She is on the Board of Charge Across Town, and a member of the Association of Women in Water, Energy & Environment; California Association of Public Information Officers; Climate Reality Leadership Corps; Public Relations Society of America; and Women in Cleantech and Sustainability. 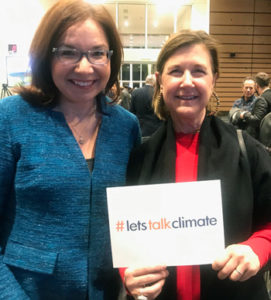